The group was given a full tour of the front-line facilities that support the squadron’s Eurofighter Typhoon aircraft -- which more than 70 MAA companies help to make and service.

As they left the base at the end of an unforgettable visit, the mood was summed up by one visitor: “I feel totally protected and safe in their hands.”

After being warmly welcomed by Wg Cdr I J Townsend MA, OC 3(F) Sqn to the squadron’s facilities at the far side of the airfield, the MAA group was first given an hour-long in-depth slide show by XO Sqn Ldr Billy Cooper of the Typhoon’s flying capabilities, including pictures from a recent tour of duty by the squadron’s pilots in the Baltics projecting NATO power in the context of the current Ukraine political situation. The visitors recognised that the presentation only scratched the surface of the pilot’s capability and knowledge, with several of the aircraft’s fighting abilities only alluded to for security reasons. 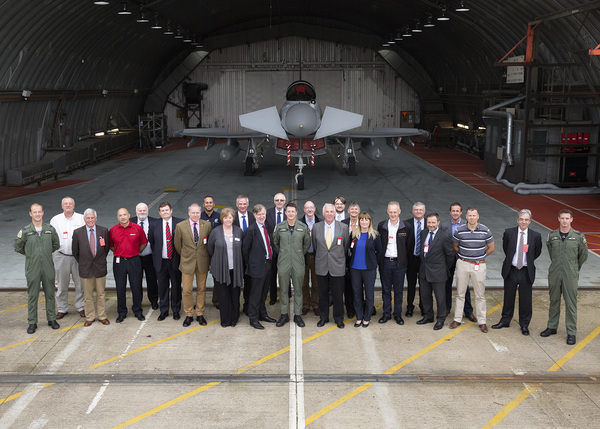 The MAA group then had its breath taken away by a flying display of the Typhoon’s aerobatic prowess of the type seen at the Farnborough Airshow, with the difference being that this display, instead of set off at some distance from the viewer for safety reasons, was all around them and over their heads at 250ft altitude under low cloud – and was even louder. Flown like this, the visitors were told, the Typhoon would use all its fuel in only a few minutes, compared to a relatively miserly consumption obtained at a steady speed at high altitude.

An inspirational team of young engineers next showed the MAA visitors, broken into small groups, around a Typhoon aircraft in its hardened hanger, reviewing in considerable detail for over an hour their skilled maintenance activities whether mechanical (structure and engine), avionics or weapons systems and answering adeptly all the tricky questions the visitors could throw at them. 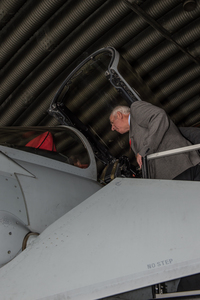 Taking a look at the cockpit 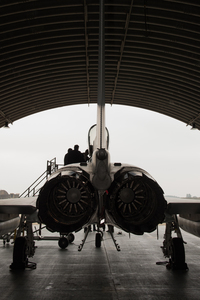 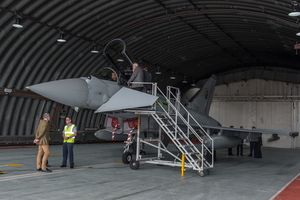 The final leg of this spectacular tour was to the base’s advanced four-seat flight simulator system which the MAA group was shown from the viewpoint of a pilot actually flying the simulator, then from the viewpoint of the senior experienced trainer able to programme many different types of missions and challenges to develop the skills of the pilot. No real surprise to find that the flight simulator system is so powerful it is the biggest consumer of electricity on the entire base.

Operational pilot Flt Lt Tim J. Pye proved an exceptional host for the MAA group from beginning to end of a day perhaps the highlight of which was his measured but spellbinding debrief of a four-aircraft bombing mission he and three colleagues had “flown” the previous day on the simulator.

At the end of an unforgettable visit MAA chairman Clive Snowdon presented Wing Commander Townsend with an MAA membership certificate marking the award of honorary membership of the Midlands Aerospace Alliance to the squadron. The Wing Commander in turn made clear he understood just how widespread and deep is the industrial network that produces and sustains the aircraft and how much this work by MAA member companies is appreciated by the squadron itself. 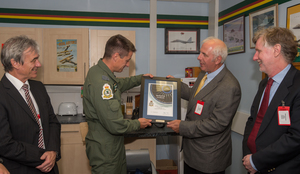 DRAMA additive hour is taking a break this week