MAA chairman Clive Snowdon announces the results of the board election at the recent MAA AGM.

MAA chairman Clive Snowdon announced the names of two new directors elected and one director returned to the MAA board for two year terms of office at the MAA members meeting and AGM on 8 October 2015.

The new directors are Stephen Cheetham, Managing Director, PK Engineering and Craig Fullwood, Sales Manager, MJ Sections. They join more than 60 Midlands aerospace industry leaders who support the MAA as directors or as members of one of the MAA's three operational working groups.

Dr. Alan Duffield, General Manager, Winbro Advanced Machining, was re-elected to the board. Clive Snowdon thanked Gareth Jones, Managing Director, In-Comm Training & Business Services, for also standing in the election. Retiring directors Mike Beirns and Adrian Leatherland, both of whom have moved to new jobs outside the region, were thanked for their excellent contributions to the MAA board. 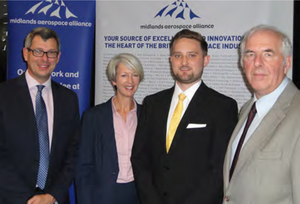 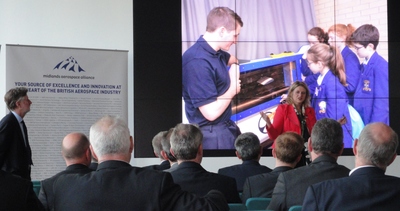 Also at the AGM

The message from aerospace to the new UK government – an echo of legendary Spitfire test pilot Captain Joseph ‘Mutt’ Summers – must be “Don’t change a thing!” Katherine Bennett OBE, vice-president Public Affairs for Airbus, made the comment during her keynote address to members of the MAA. In a wide-ranging presentation that gave the assembled members fascinating insights into the world of the industry lobbyist working closely with government, Bennett praised the national Aerospace Growth Partnership (AGP) programme and the MAA’s role in the AGP representing the supply chain perspective. Her remarks ensured the AGM was a lively affair with members later contributing new ideas on what they wanted from the Midlands Aerospace Alliance.

MAA chief executive Dr Andrew Mair reviewed the services the MAA currently offers its members, which opened discussion about other possible ways members could benefit from the organisation.

To read more about the MAA Board and working groups click here.
Related articles